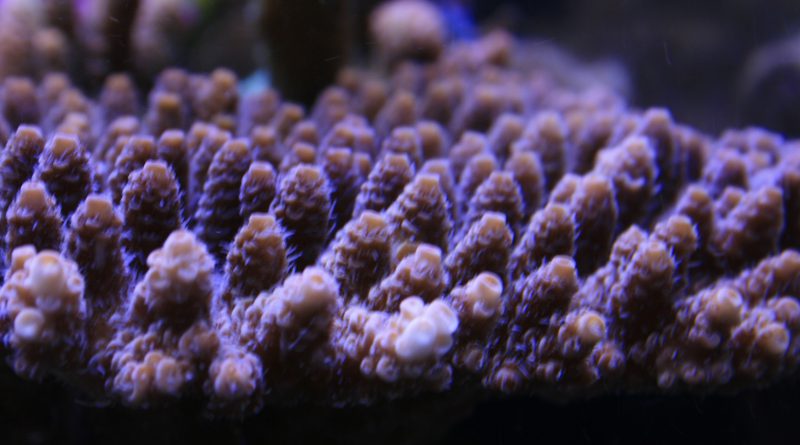 Calcium carbonate is a fundamental compound for our reefs and more generally for whatever salt water tank. We can divide this molecule into 2 pieces, calcium and carbonate: the first is well known but carbonates are often little considered.

Carbonates are identified with the abbreviation KH (carbonate hardness), their concentration is also known as alkalinity, since carbonates (or better carbonate salts) produce in water a basic reaction.

First of all let’s see the chemical nature of carbonates, they derive from the dissociation of carbonic acid H2CO3 or from the dissociation of a salt composed by carbonates and metas, for example calcium carbonate. Carbonate is not an element as calcium or iron, but rather a molecule, id est a compound of 2 or more different elements (atoms). Carbonates are composed by 2 (carbon + oxygen) or 3 (carbon + oxygen + hydrogen) elements and have 1 or 2 electrical charge. Remember that a electrically charged atom or molecule is defined ion, positive or negative depending on the sign of the charge. 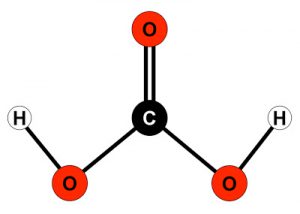 We talk about carbonates because there are 2 species:

The immediate consequence of the existence of those 2 species can be detected in the aquarium tests, indeed we cannot determinate the exact quantity as for calcium or phosphates tests, instead we get a value expressed in hardness degrees, index of the simultaneous concentration of both chemical species.

Carbonates in addition to the coral growth, are also fundamental for the life of our reef because they are the main buffer system. Smarter readers should already have noticed that the dissociation of carbonic acid releases protons (H+) which concentration is expressed with another index: pH. In order to understand this important step, we have to inquiry from where the carbonic acid comes from:

Carbonic acid is the result of the reaction between water and carbon dioxide, and in turn it releases 2 protons:

Here’s how the carbon dioxide cause the lowering of pH by rising the proton concentration. 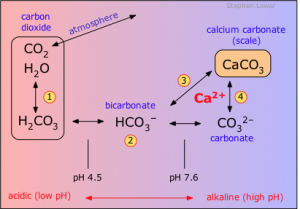 Before we talked about buffer system, this term stands for a system composed by one or more molecules that varying their proton asset can oppose to pH fluctuations. The system carbonic acid/bicarbonate/carbonate thanks to the fluency in acquiring or yielding protons is the main regulator and stabilizer of pH in our tanks and also in our blood.

I close this article with a nod to the boron that will be in depth analyzed in a dedicated article. As for carbonic acid, also boric acid is a buffer system but its concentration is infinitely lower than carbonic so the buffering capacity is negligible. Nevertheless we have to consider that boron is detected by KH tests, so when checking carbonate values we should keep in account that a small amount is due to boron.