Storage: away from humidity

ZEOvit is the Korallen-Zucht brand zeolite, designed for the Zeovit system. Zeolite is the fulcrum of many bacterial reproduction systems, it is a natural mineral, composed by aluminum and silicon atoms, arranged to form a symmetrical and highly porous structure. This feature makes zeolite a perfect molecular filter, capable of binding several organic and inorganic compounds, furthermore it is an optimal support for bacterial colonies.

Zeolite is defined as an adsorbing media, this means that it subtracts unwanted molecules, showing a particular affinity for nitrogen compounds.

Zeolite must be used in a specific reactor that makes possible a fine tuning of the water flow through the media and creates a flux from the bottom to the top. Furthermore the zeolite reactor allows an easy shaking of the media t

hanks to the handle.

The use of zeolite is fundamental for bacterial reproduction systems but brings great benefits also to berlin method reefs since it effectively removes ammonia and wastes. Referring to ZEOvit, the dosing is 1 liter for 400 liters of tank volume, with a maximum flow of 400 liters/hour.

Let’s see what happens in our reactor: the pump delivers water in the chamber and the adsorption takes place, molecules as ammonia are bound by the molecular grid. Secondly the bacterial colonies start to metabolize the phosphates and nitrogen compounds. For further informations about nitrogen and phosphorus cycles I demand to the dedicated articles.

Zeolite becomes a support for bacterial colonies in a similar way as live rocks. The continuous and massive proliferation leads to the coating of zeolite stones with a bacterial film that insulate them from water and prevents the adsorption. In order to avoid this coating, the zeolite need to be periodically shaken, the rubbing of stones allows the cleaning of t
he surface and the bacterial film is spread in water.

After the shaking, zeolite recovers its functionality and rapidly reduces the concentration of nitrogen compounds, now it should be clear that the frequency and intensity of shaking are fundamental in varying the trophic equilibrium of the tank. Definitely, the more we shake zeolite and more the water is impoverished of wastes and aslo nutrients, so if we overdo we risk to endanger corals.

An interesting parallel effect of the shaking is the spreading of huge quantities of bacteria in the water column, this is a priceless source of live food for corals and microorganisms. Furthermore those bacteria are removed by the skimmer, this represents a good way for the direct elimination of wastes.

Zeolite has a lifespan of about 3 months, after this time it should be replaced, nevertheless in advanced systems where it is deeply stressed it should be changed every month, in order to ensure best performance. During the replacement, it is highly recommended to leave on the bottom of the reactor about 5-10% of the old zeolite, this helps bacteria settling on the new stones. After the renewal it is also recommended to dose Zeobak (1 drop/100 liters).

I end this article informing that zeolite has a quite high affinity for some trace elements and carbonates, in particular the first days after the change we can notice a slight decline of KH values. 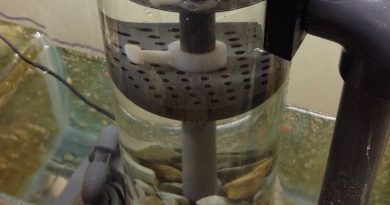